As part of the Mayflower 400 celebrations in 2020 Plymouth has created a circular Mayflower Trail route around the historic Barbican highlighting places and areas of interest.

Following an initial consultation which highlighted some of the barriers that disabled people face, Plymouth City Council have asked Plymouth Area Disability Action Network to formally consult with disabled people on the accessibility of the route and offer suggestions on possible improvements.

This consultation will cover:

The scope of this project is not to look at the accessibility of the shops located in the Barbican.

There will be an information morning on Friday 20th September between 10.30am and 1.30pm at the Council House hosted by PADAN where you will have a chance to talk to those involved in the project, see samples of materials and give feedback on the latest changes.

We are also looking for individuals who are interested in making the Mayflower Trail as accessible as possible and are willing to volunteer some time to evaluate the trail route and information boards. We also have video walk-through of the route for those who are unable for whatever reason to access the Mayflower Trail. If you are interested please contact Hannah Boyle at heritagetrailsplymouth@gmail.com

Below provides some information we currently have regarding the route and information boards. All information is subject to change as it is still in the draft stage. It is divided into the sections that the consultation will cover. At the end of each section is a short questionnaire which we would be grateful if you would take time to answer.

The current Mayflower Trail route is shown below 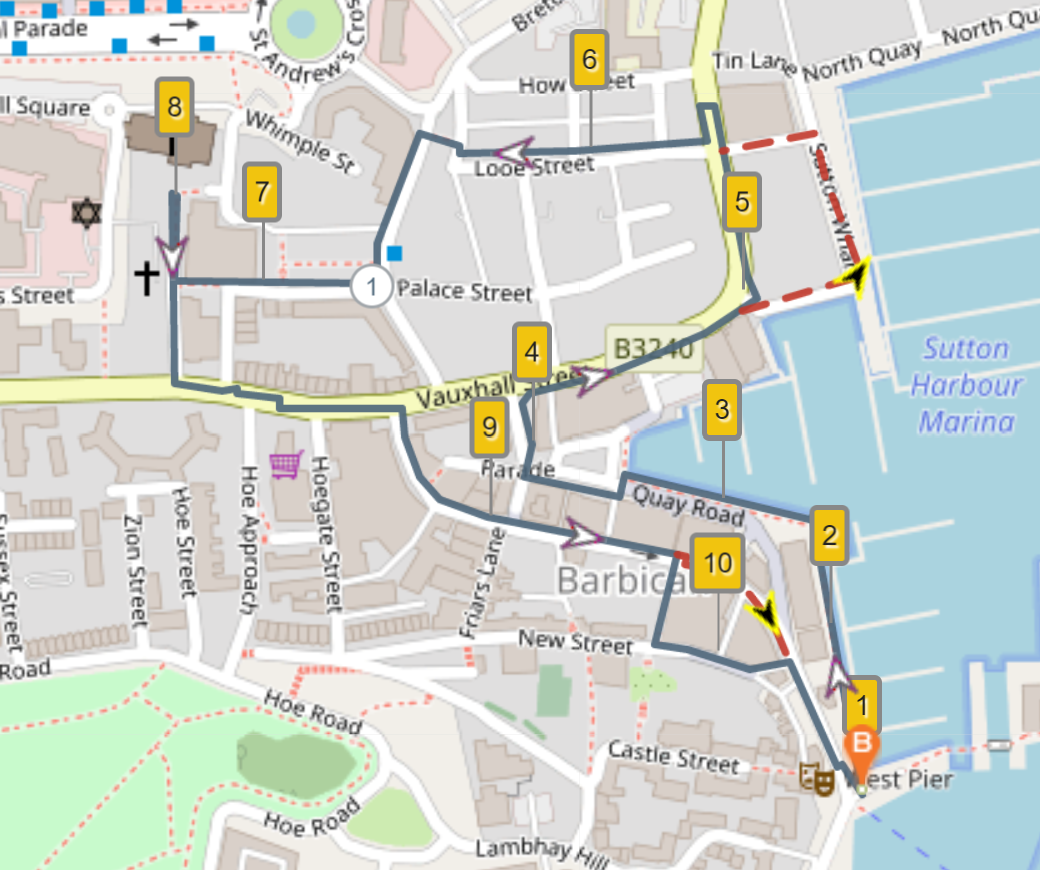 The numbers highlighted on the route indicate where the information boards would most likely be put, a few have a choice of location that we would like to consult on. These will display information about the site or historical details alongside a picture related to the site and a map of the route highlighting your current position.

The image shows the whole route as well as two additional sections. The first is along Sutton Wharf for those who wish to attempt the cobbles. The second continues along Southside Street instead of heading up to New Street. Again this is an alternative to having to attempt both cobbles and a step climb. Taking the route along Southside Street does mean that people will miss out the Elizabethan House and Information Board 10.

Part of the consultation will look at whether a shorter route should be shown which would focus on the route south of Vauxhall Street, after board number 4 at the end of that road the shorter route would turn left along Vauxhall Street and meet up with the main route as it turns down Southside Street.

Another part of the consultation is to travel the route and highlight which side of the streets would be best to go along, as well as highlighting the locations of drop curbs and whether anymore need to be added.

Part of the consultation will look at the preferred locations for new benches. Some places have already been confirmed but there is some scope for a few more benches. 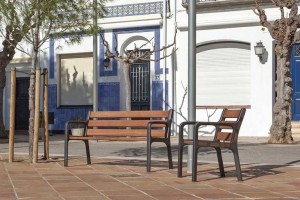 There will be ten freestanding information panels located at strategic points along the route.

The images below show mock ups of how the information panels will appear.

The information boards will stand at almost 2 metres (1.96m) tall. The width will be 33cm and just 6cm deep. Each of the four sections shown will also be 33cm tall.

This image shows an example of the material and text colour that will be used, although there will also be a second colour that has yet to be decided. 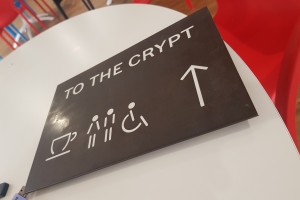 In addition to the large information panels, there will be around 30 in ground markers situated along the route, although exact positions have not been confirmed yet. 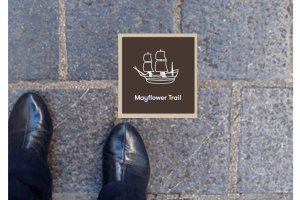 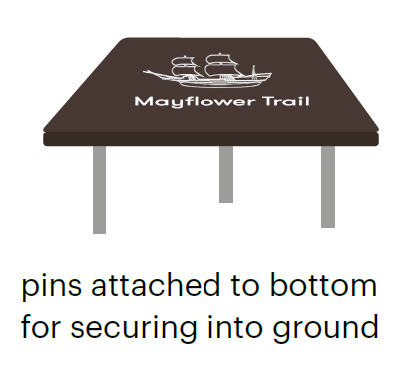 There will be a leaflet showing the route, part of the consultation will be about what other information should be included on the map. For example car parking (both car parks and on street parking), hills (how should gradients be included), WC's, drop curbs, information board locations, seating etc.

Another consideration is how large should the physical map/leaflet be, the larger it is the more information that can be shown however it might not then be a manageable size to use.

In addition to the physical leaflet the trail will also have its own app, it is important that any barriers to accessing an app are understood. There is the potential for the app to contain more accessible information for example audio and an easy read version of the text that is on the information boards, as well as an audio description of the route.